Start
–
About us
–
Our history 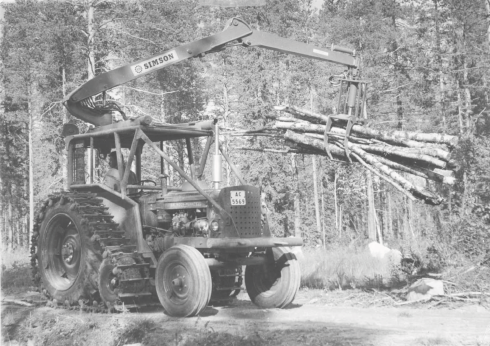 Hultdin System AB was founded in 1928 by Waldemar Hultdin. He began his career as a carpenter in the village of Aspliden, deep in the interior of County Västerbotten in northern Sweden. At first, Waldemar made furniture, but once all the families in the village had all they needed, he made the strategic decision to found a forge.

Putting his plan into action, after three days’ training in the nearby village of Malå, Waldemar changed career paths and entered the world of horse-drawn carriages. For some 20 years, he manufactured carriages, sleds, and tools for handling timber. Initially, Waldemar worked alone, but after a few years his two sons Gustav and Ove joined him.

In 1956, Hultdins took on its first permanent employee, Haldo Hultdin. At that time, the company had also begun developing forestry equipment for agricultural tractors. The tractors were equipped with a roof-mounted crane and grapple and half tracks were fitted for increased maneuverability.

By 1963, the company had grown to number 30 employees and generate annual sales of SEK 2 million. A large order from the cooperative Norrbottens Lantmän for 45 complete tractors equipped with three-quarter tracks and factory mounted cranes further highlighted the issue of growth, so Hultdins decided to move to new premises in Malå.

1965 saw the start of the Partraktor project, together with the then local dealer for Nuffield engines. The Partraktor was an agricultural and forestry tractor with two engines, each independently powering the tracks on one side of the machine. The machine was steered by altering the speed of each engine and its off-road maneuverability was unsurpassed. The project proved a great success and about forty machines were built.

Soon, however, any glimmer of hope in the forests of Lapland was extinguished. The Partraktor’s future turned bleak as the Swedish Road Administration refused to approve its use on public roads. A diligent civil servant at the SRA couldn’t let go of the fact that the machine’s steering worsened as its speed increased, and the Partraktor story ended here.

After 1970, the company grew as a subcontractor in the mechanical engineering industry. Hultdins manufactured everything from mine carts to painting robots, but now and again even produced proprietary products.

During the mid-1970s, Hultdins had almost one hundred employees in Malå. In the early 1980s, a new strategy was drawn up, resulting in the Hultdins we know today. The focus was to be proprietary products, and they were to be found at the tip of a crane.

Since 1928, Hultdins has been developing and manufacturing tomorrow's tools and components for forest and construction machinery. Our products SuperCut and SuperGrip are used
every day worldwide.

Do you want to contact someone at Hultdins or pay us a visit?